Home / News / Roma integration is a success in Pusča 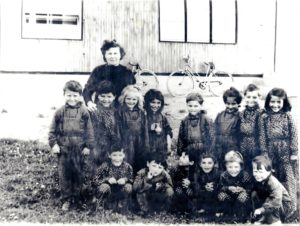 “Child education is our priority” says Darko Rudas, prominent politician of Pusča (Slovenia). The village used to be the Roma settlement of Murska Sobota, today it is a municipality with its own kindergarten and fire brigade. Pusča looks at its future without forgetting the past.

Situated in the North of the country, among endless cornfields, which are characteristic of the region, Pusča has shown to Slovenia that investing in inclusion pays off.

We get a tour by Darko Rudas, who is one of the main figures of  the village. Everyone knows him here but his fame reaches also outside of the settlement: he is a politician and member of the local government. Mr. Rudas has been advocating for the integration and the rights of Roma people for the past 20 years.

“Pusča has 850 inhabitants”, he says. “It is the only settlement in Europe with their own municipality and one of the few where everyone has access to water and electricity”, he adds.

Also, the majority of the population is employed. They have integrated well with “the majority-community”, this how he calls the rest of the inhabitants of Murska Sobota. “In the South-East of Slovenia, there have been problems between Roma and non-Roma”, he admits “but here, it is really different”.

Murska Sobota has eight preschools units and Pusča is officially one of them. Roma and non-Roma learn here together and when children leave to go to primary school in Murska Sobota they integrate without problems.

The preschool was launched in 1962. Mr. Rudas was among the first ones to go to preschool, “it’s there, where children learn to expand their horizon”, he says. “They learn to think out of the box;” but there is more: “for 50 years there were only Romani children in that preschool, now things have changed”, he adds. “Children from outside the village come here to attend too.”

“Besides preschool, football plays an important role for integration”, he says, while looking over nicely maintained camps. “Trough football, you get in touch with the rest of Murska Sobota. Pusča has its own club since 1959. Marinko Sarkezi, one of the inhabitants of the village lately has even played in the Champions League,” Mr. Rudas continues.

What is the secret? We ask.

He smiles revealing a bit of pride. “The local community has granted inclusion in exchange for respect of the rules and the Roma people have accepted it.” As he likes to state: “as many rights, so many duties. That’s just how society works.”

He indicates the trees at the entrance of the settlement. They were planted by the president of Slovenia together with the children of the preschool. “You have to know,” he says, “the tree is an important symbol for Roma, it has to do with the roots of the settlement”.

We arrive in the “White Street”. The majority of people that live here have mixed marriages Roma and non-Roma, hence the name. After, we reach the fire brigade, “we are maybe the only Roma settlement in the world with their own fire association,” Mr. Rudas says proudly. A new car just been bought and the service is ensured by volunteers only.

Next to it, there is a social center for arts, sport and child care. It has a playground with swings and other games. A European flag waves in front of it, next to the Slovenian one. “Child education is our priority”, he states, “that’s why we organize everything around them.” The playground is a place where children and parents can play together. The citizen took the initiative to build the center. After, the municipality of Murska Sobota decided to contribute financially.

In the future a music school will add to it. Also, the village plans to expand the preschool and promote Pusča as a tourist attraction. So tourists will be able to visit and see how the village became such a success. They will be able to learn about the Romani culture, music and cuisine.

We pass by the only house in state of disrepair in the whole village. There are entire chunks of wall missing. “This is the only wooden house we have left,” Mr Rudas says, “we do not want to forget our past, so we keep it as a museum piece”, he adds.

Almost at the end of our tour, we stop at a cross road. “This is a place with positive energy,” Mr Rudas looks us in the eyes. “It is marked by four maple trees; this is where the first man who bought this land, started the settlement once. If you are in despair and need some good luck and good vibrations, you should come here,” he smiles.

The educators of Pusča are members of REYN Slovenia.