Home / News / The children of the Porjamos 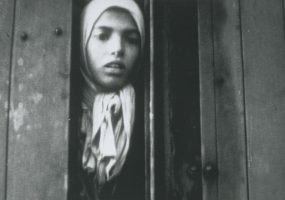 On 2 August 1944, about 3000 Roma were exterminated all together in the concentration camp of Auschwitz, Poland. For many years the Porjamos, the Roma genocide, was unreported and even hidden. Here is why recalling the facts is important.

Often we wrote about the art of storytelling as being an important part of Romani culture. The stories allow us to recognize Roma people who became symbolic figures. Also, in any culture and for any child it is inspirational to celebrate positive role models.

The girl with the scarf

A photo showing the girl with the scarf standing on the closing door of a train at the Westerbork camp in the Netherlands, documented children being deported to Nazi’s concentration camps in the 1940s. For years everyone assumed that the girl was Jewish. However in the early 1990s, a Dutch journalist called Aad Wagenaar, found out that she was not Jewish but actually a Sinti. Her name being Settela Steinbach.

Her father was a trader and violinist, her mother ran the household in their wagon. Searching for work, they moved from village to village in the Netherlands.

She died in 1944 in Auschwitz-Birkenau. Settela and her family were registered in a special section of the camp. The notorious camp where doctor Josef Mengele performed medical experiments on prisoners including children and twins.

Stories like the one of Settela became iconic and need to be told. You can read about her and about other deported Romani children on the portal romasinti.eu. There is Stjepan from Croatia, Krystyna from Poland, Elina from Czechoslovakia and more. The original tales, the documents and the videos shock the audience and reveal their tragic destiny.

Those stories are important not only because they tell us about the persecution of Sinti and Roma by the Nazi but because they give a human face to the Romani genocide.

Also the initiative Dikh he na bister – Look and don’t forget, driven by young Roma, raises awareness and advocates for the official recognition of 2 August as the RomaHolocaust Memorial Day. As mentioned on their website they do it to “pay homage to the victims, heroes, survivors and strengthen the identity based on the deep knowledge of the past”. Find out more on their website here.

Today marks the beginning of #16daysofaction against VAWG!

We are hosting a free virtual screening of our unreleased film ‘Never Going to Beat You’ followed by a Q&A on Thursday the 9th of December at 6PM!

Find out more and get your ticket here:
https://www.eventbrite.co.uk/e/never-going-to-beat-you-film-screening-and-qa-tickets-207872802147