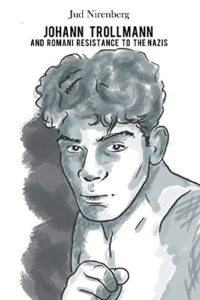 With the birth of my son fast approaching, I frequently find myself thinking about what I lacked as a child. I often read books about heroes and was sad when none of them looked like me. The boys I accompanied on their adventures were all light-skinned; different from me – a brown-skinned boy from a working-class neighbourhood, a Romani boy whose parents struggled to keep their jobs in a transforming Czechoslovakia.

Today, I know there are a number of Romani heroes that I can show to my son. But often, their stories are framed in history books, are boring and overly descriptive.

This has recently been changed by Jud Nirenberg, who has made the lives of Romani fathers a little easier. In his book, “Johann Trollmann and Romani Resistance to the Nazis ”, Nirenberg has, for our sons, brought a Romani hero back to life. Contrary to the descriptive title of the book, it is not only about the persecution of Sinti and Roma by fascists, it is much more than a depiction of historical events. It brings a human face to the story of Romani genocide by retelling the story of Germany’s light-heavyweight boxing champion – Rukeli  – whose name in Romani means tree.

The book touchingly represents Rukeli’s early life, home environment and school. We read about his first days at school and how he made his teacher angry by not responding to being called Johann. Only someone with an insight into the Romani culture for nicknames can understand how confusing it must have been for him to be called anything other than Rukeli. It was little easier for his brother Carlo, with whom Rukeli shared his bed. His home-name was Kalo (black in Romani), pronounced almost as Carlo in German.

Jud Nirenberg’s book is not a story for children. But the contents and the narrative remind us of a craft we have almost forgotten. Depicting historical events in the Romani environment was never about historical detail. It was about the stories, the characters, the plot and the suspense. Jud is doing a great job here reminding us of that tradition. Jud Nirenberg gave us the resources, now it is up to us – as Romani fathers (to be) – to share the story with our children. Just like our grandfathers did whenever the family gathered.

The art of storytelling has always been part of Romani culture and not in the distant past, but until quite recently. In my childhood, we used to retell the movies we saw. Unlike today, we did not have a opportunity to handover a DVD to a friend or send them a link to an online movie. Telling and retelling were the only ways to share. Maybe we need to go back to that; starting with a book and the story of Rukeli.