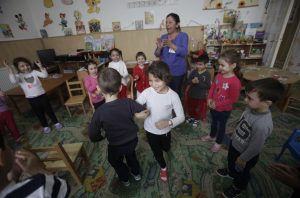 The 80-percent-in-poverty figure that dominated most of the media headlines about recent Roma survey conducted by the Fundamental Rights Agency (FRA). Clearly the share of Roma families at risk of poverty is striking, but is it really the most concerning finding of the study?

Last week we wrote about the FRA findings, sharing our concerns also about extremely low preschool attendance of young Romani children. A number of other findings are disturbing in the study as well. If every third Romani person lives in a household without running water, is it not upsetting how many children grow up in this environment? From the available information however, it is clear that most of Romani population, including families with young children are facing a combination of factors making their lives harder.

Segregated education is often associated with lower quality, but its social impacts make it much worse. Not only the Romani children get low quality education, but they also learn to live in a parallel world. In their world, most people are Roma. In their world, 80% of people are at risk of poverty. In their world, every third person lives in a household without tap water.

And there is little to no reason to hope that the non-Romani classmates, where classes have some, are living in very different world. Most possibly their parents cannot afford to bring them to different schools. So while different in some aspects, in many their living conditions and family background are not too different.

In many countries we have witnessed anti-Roma demonstrations and the online world is full of anti-Roma hate. Children are not excluded from being targets racist hatred and it starts when young children are taught that Roma are not part of their society. That is the power of segregation.

Tomorrow is #HumanRightsDay. Help us shouting out loud that all children have the right not to live segregated. Roma children too.

Tweet and post: End school segregation for #Romani children! Don’t let them grow up in a parallel world #HumanRightsDay http://reyn.eu/news_posts/humanrightsday-end-school-segregation-for-romani-children/