Home / News / TOY for Inclusion is a good practice, town of Sisak says 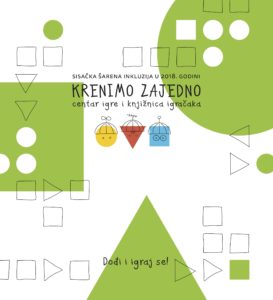 The municipality of Sisak (Croatia) has produced a booklet to promote the project.

The Croatian town of Sisak is proud of the local TOY for Inclusion Play Hub. The initiative has been recognized as a good practice that fosters the development of children and their social inclusion.

The booklet invites adults and children to join the Play Hub activities for playing, attending workshops or volunteering.

Launched in the primary school of Braća Bobetko in the town of Sisak on January 24, 2018, the Play Hub was opened by the mayor Kristina Baniček and by Klara Perković, mayor of the children’s city council.

An estimated 2.165 Roma people out of a total population of 61.497 live in the town. Many children of the Roma settlements in the surroundings attend the school of Braća Bobetko.

The Play Hub opens on Tuesdays and Thursdays from 5 PM to 7 PM.

The opening is made possible thanks to the REYN National Coordinator in Croatia Korak Po Korak.