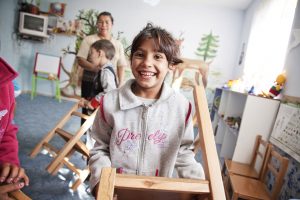 It’s four thousand the total number of children involved in the TOY for Inclusion Play Hubs throughout Europe in 2018. One third of them being from Romani origin. An unexpected success supported by local communities.

In January 2018, when the Play Hubs were about to be launched, these numbers would have been unthinkable by many.

About 2,400 parents and grandparents participated in the 250 activities organized by over four hundred practitioners, nearly 20% being of Roma origin. Access all the numbers here.

We started in eight towns and villages where the segregation of Romani children in school and of families in many aspects of their life is a confronting issue.

Thanks to the voluntary work of local communities and professionals, the TOY for Inclusion Play Hubs became the gateway to kindergarten and school for many Romani children.

Along the way, TOY for Inclusion has received encouraging words of appreciation from parents, children and political leaders. We shall not forget the words of Anna Dirdova, Roma mother of six children who said “I have never felt so welcome and respected before.” And neither those of the Council of Europe Secretary General Thorbjørn Jagland, who in Slovakia told us, “your project is the best example of how to include Roma children at an early age”.

At the end of 2018 we were delighted to receive the Lifelong Learning Awards in the category ‘Best Learning Environment’.

This success gave us a strong new push to do more. In 2019, TOY for Inclusion will create more Play Hubs in seven countries and will expand to Turkey. Stay tuned!

Disclaimer: our data about Roma are based on estimations; TOY for Inclusion does not collect information based on the ethnic origin of participants.