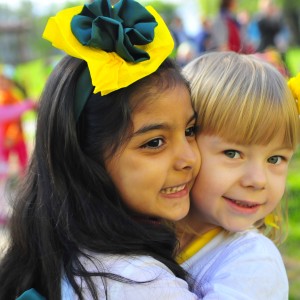 At the beginning of last week, representatives of international REYN – Romani Early Years Network, met representatives of national networks and other partners to kick-off a joint initiative for the next three years. In the project, ‘we will demonstrate that inclusion is possible’, stated the draft of project’s mission statement. And indeed, it is the right time to make inclusion possible, especially in light of global politics and as we commemorate the Holocaust Memorial Day – January 27.

In addition to crossing ethnic barriers, TOY for Inclusion also builds on the Together Old and Young approach in which we hope to bring together people from diverse age groups. Public spaces created for this purpose – TOY libraries, where children will get a chance to borrow a variety of toys, too – have the ambition of being the unique places for these interactions.

At the end of 2016, the EU Fundamental Rights Agency statistically confirmed what we know, anecdotally, from members of REYN – that the level of segregation of Romani children is extreme. In many countries, more than half of Romani children have all or a majority Romani classmates. Whole Roma/non-Roma knowledge is then based on stereotypes created inside our ethnically homogeneous bubbles.

Those bubbles are segmented along the lines of age, income, religion, abilities and more. And by not bursting those bubbles we allow politicians to build their campaigns of ‘us and them’ – an attitude which can be easily traced to the events which led to the Holocaust. Atrocities of World War II were possible only because country leaders made people believe that we are different from them. And they were bad.

Learning to live together – as opposed to living in a bubble – is the only way to resist the emergence of extremist politics. When the President of the United States marks Muslims as ‘others’  and the Slovak prime minister starts using the word ‘gypsy’ in public speeches, we need to be alert. But apart from fighting extremist politics at the top level, we also need to work in communities. We need to bring people together, all kinds of people – Roma, non-Roma, young and old. And that is what TOY for Inclusion is about.