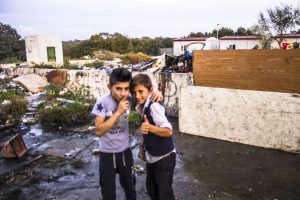 In Rome, an estimated 4,100 Romani children live in poverty: 1,350 are between zero and six years old, 2,750 are aged seven to 18. These children and young people suffer from social exclusion and stigma. A few have access to health services. For these children life expectancy is ten years below the average, one in five will not enter schooling paths and will have almost no possibilities to go to university.

The lack of proper housing is among the first challenges to school retention. The majority of slums are excluded from public service; they are often located in extreme peripheries and polluted areas. Lack of income, discrimination, cultural deprivation and inadequate housing are factors that can impact enormously on the physical and psychological well being of children. These factors can also cause the so-called “ghetto diseases”: malnutrition, scabies, tuberculosis, anxiety and depression.

Forced evictions of informal settlements frequently happen and constitute traumatic events for children that live in the slums. This has serious consequences on the children’s right to education. In Naples, in the neighborhood of Gianturco, a forced eviction that involved 1,300 Roma in housing emergency (half of them were minors), caused a real diaspora just at the eve of International Roma Day on 8 April 2017.

In Rome, since November 2016 there was an increased 133% in forced evictions.