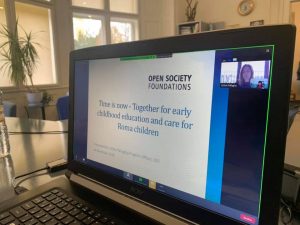 “2020 is a year of challenge for each of us and for our network in particular,” said REYN-Ukraine national coordinator Eleonora Kulchar during the online forum “We are all Children” that took place on November 24-25. “Unfortunately, we cannot look in the eyes of each of you or hug you. But I thank each one of you that you were able to find time for this forum and that you are ready to remember that children have no nationality, social or economic status. All of them are just children who deserve love and support from us, adults.”

During the forum, organized by the Transcarpathian Regional Charitable Foundation “Blago”, the host organization of REYN, participants discussed strategic goals of the REYN-Ukraine network and how they resonate with the draft of the new National Roma Integration Strategy  in Ukraine. REYN International Coordinator Aljosa Rudas spoke about the challenges faced by Roma communities, families and children and highlighted how National REYNs support them.  Open Society Foundations Program Officer of Early Childhood Program Szilvia Pallaghy outlined the child’s interests in the new EU Roma strategic framework on equality, inclusion and participation for 2020-2030.

The results of a joint study by REYN-Ukraine and the Ministry of Education and Science of Ukraine on Roma children’s access to education during the pandemic were also discussed during the forum. Even before the COVID-19 pandemic, Roma children experienced bullying and not fair treatment at school. With the pandemic, this challenges became more severe.The study shows that 51.8% of parents reported that their children were bullied by the teachers, and 47.9% said that children were bullied by other children. In the whole country, distance learning was almost inaccessible to Roma children, as only a third of respondents had a smartphone, tablet or laptop and only 27% use regularly internet. In large families, one device was available for all children with repercussions on their online attendance and performance. In almost every third family, children did not do homework at all.

Encouraging children to dream and grow

This year, under REYN Ukraine, Transcarpathian Regional Charitable Foundation “Blago” supported financially six projects, and provided advice to two more. These projects were designed and implemented by REYN members in different Ukrainian cities, who  shared their experience and best practices during the forum. Among the projects, there is a street school of primary socialization for Roma children living in temporary settlements in the Lviv region, made possible by the integrated work of social workers, juvenile prevention officers and Roma volunteers.

“Children can and should dream about more things than what they have now!” the project implementors said.

Besides, this year, thanks to REYN, the following initiatives started in Ukraine: 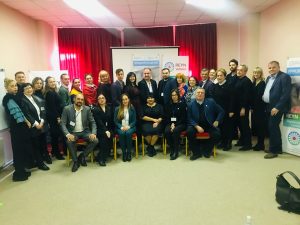 A new study presented by REYN Ukraine shows that Romani children are lagging behind in school compared to their peers. Advocates for early childhood development called for investing in Romani children.

The education and development of Romani children will not be beneficial to Roma only but also to future taxpayers, to the economic sector and to the country in general. This is the main message sent from the Annual REYN Ukraine Conference last week. The event was attended by experts, government representatives, early childhood professionals, Roma parents and the civil society.

RENY Ukraine has presented the results of a new report on the status of Romani children’s housing and education. Romani children are lagging behind in school compared to their non Romani peers. The causes of this are: Romani children usually do not attend preschool education so they already start with a gap that they have to fill; also, teachers do not seem to have the right tools to work with children that are diverse socially, economically and culturally.

A large majority of the Romani families has difficulties to provide for their children so attending preschool is of secondary importance to them. In the Transcarpathia region 54.4% of children go to bed hungry sometimes. Although the situation is not so critical in other areas, there are problems with the purchase of clothing, footwear and office supplies.

Also, 35% of Roma parents in Transcarpathia stated that it was difficult for their children to study, in particular, writing, reading and mathematics. This indicates a low level of preschool preparation. At the same time, teachers declare that the main problems is the lack of discipline, which indicates a low level of socialization and adaptation of Roma children to the educational process as a whole.

The Conference was also saw the participation of REYN members in the country, they asked to policy makers a society where every child has the right to grow up happy.

The event took place on November 21-22, 2019. REYN National Networks from Serbia, Hungary and Slovakia shared with the audience their good practices and lessons learned.

The meeting was also attended by Zemfira Kondur, a representative of the Council of Europe Office in Ukraine, who said that the results of the REYN Ukraine research were recently presented in Strasbourg during the World Democracy Forum. 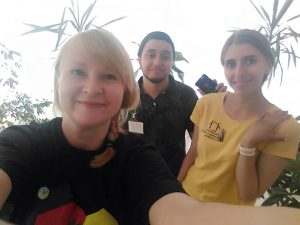 The REYN National Networks from Slovakia, Serbia and Italy, joined the Ukrainian Step by Step Foundation (USSF) in Odessa at the ‘School of Advocacy’. An event to share advocacy strategies with REYN Ukraine members on July 2nd and 3rd.

By meeting their international colleagues, REYN Ukraine members learned new advocacy techniques that can improve living conditions of Roma communities at local and at national level. spreading of diseases among Roma communities.

The event was hosted by USSF, national coordinator of REYN Ukraine.  On the occasion, participants also visited the villages of Nerubayskoe and Korsuntsi, where large Roma communities live. They spoke to the Roma families living there and saw their housing conditions. The REYN Ukraine coordinator, Eleonora Kulchar, also presented their advocacy work in the city of Uzhgorod and in the country.

The two-day meeting was rated of ‘high value’ by local activists and human rights defenders, and by all those who are part of REYN in the country. 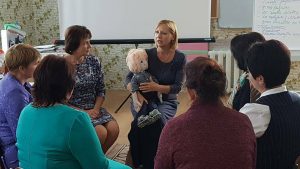 A series of workshops based on the Persona Doll methodology have been conducted by the REYN National Network, the Ukrainian Step by Step Foundation (USSF) and UNICEF. The Persona Doll approach is a way to teach children to live with ethnic diversity. Each doll (usually rag doll) has its own profile, personality and story. Dolls and their stories help children develop empathy and encourage them to react and stand for themselves whenever they witness injustice or prejudice attitudes.

Over the past few years, USSF and UNICEF have trained over 2,600 teachers, psychologists and other relevant staff in 812 pre-schools in five Ukrainian regions impacted by the war: Dnipropetrovsk, Kharkiv, Zaporizhya, Donetsk and Luhansk. The Persona Doll workshops organized by the REYN National Network promoted new pedagogical and psychological approaches for practitioners who work with Romani children. A total of 45 people were trained in September-October 2017 in areas with a high presence of Roma communities more precisely in Kyiv, Dnipro, Kharkiv and Odesa region. School/pre-school teachers and principals, psychologists, experts and local educational department representatives were among the attendees.

The Persona Doll methodology has already shown successful results in different contexts and countries. Recently the training has been made available for those who work on the inclusion of Romani children in classrooms attended by Roma and non-Roma.