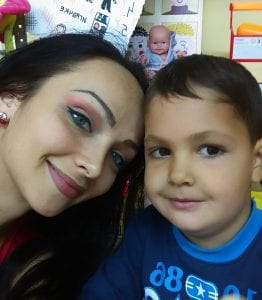 The first years of a child’s life are the most critical for their development. Alarmingly, many Romani children don’t have access to early childhood services that would stimulate them to reach their highest potential. This is a positive story, though: a five year old child who couldn’t talk and couldn’t draw, managed to gain the skills thanks to therapy.

“When Bogdan came to our Roma Community Center he couldn’t talk. Despite understanding everything we were saying, he could only speak out a few words,” says Aleksandra Miletic, Psychologist.

Bogdan is a five year old boy. He was diagnosed with expressive speech disorder and had limited fine motor skills for his age. “He could not hold a pencil properly. His play was simplified and was not developing. Most often, he was only stacking big building blocks in a certain order and color” Aleksandra says. She works in the Roma Community Center in Kragujevac, Serbia. Many Roma go there every day, children and adults.

“There are three Roma settlements nearby our center. Many people come from there with different needs”, says a representative of Romanipen, the organization that manages the place.

Bogdan comes from one of the settlements. “He is not much different from any other boy”, Aleksandra continues, “the causes of developmental disorders can be many”.

Bogdan and his family worked hard

Since his sessions at the center started, his abilities have improved enormously: Bogdan now speaks out loud and can pronounce correctly almost all the letters of the alphabet. He learned a lot of words and can make simple sentences. Thanks to his family’s commitment, he never missed a single session with Aleksandra and the speech therapist. His father is extremely happy with the results: “He has improved a lot. I noticed that he voluntarily engages in conversations with others now and he is better at drawing. Also, he is playing more with other children and made some new friends”, he says.

Since April 2017 the Roma Community Center has provided psychological help to over 100 children and adults. With 7 to 10 children accessing their services every day, the center has become of vital importance for the communities around.

When children like Bogdan are reached by services they are allowed to develop to their fullest potential. That is why REYN will keep advocating for the children’s right to access quality education and care. No more Romani and Traveller children lost! 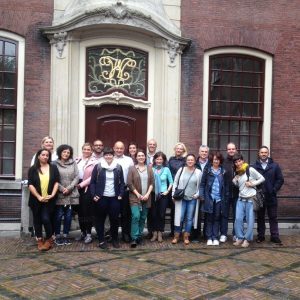 TOY for Inclusion has developed a toolkit to support practitioners and other stakeholders in learning how to create community-based play hubs (resource and meeting centers) where relationships between Roma and non-Roma families and playing across all generations is supported.

Activities organized in the play hubs involve young children of all backgrounds, their families and older adults and will be implemented in 7 European countries in the framework of the TOY for Inclusion project: Belgium, Croatia, Hungary, Italy, Latvia, Slovakia and Slovenia.

Last week, 20 practitioners have successfully attended the training and learned new competences about:

The TOY for Inclusion project aims to improve the transition experience of Roma young children from home to preschools and schools by offering an innovative response to discrimination of Romani communities.

TOY for Inclusion is creating non-segregated intergenerational play spaces in the mentioned countries. These spaces are located in areas that are reachable for both Roma and non-Roma families. They are designed and run by local committees composed by representatives of both communities (called Local Action Teams), school and preschool teachers, community development workers and local authorities.

Along with activities aimed to help children develop competences and knowledge for formal education, these spaces mobilize local communities around young children, and organize intergenerational activities involving older people with and without a Roma background.