The  host of REYN Bulgaria, the Trust for Social Achievement (TSA) will host a panel at the “The Future of Education” forum in Sofia (Bulgaria) on November 23rd-24th, 2018.

They will lead the panel titled “An Early Start to the Skills of Tomorrow”; held on the second day of the event. The members of the REYN National Network in Bulgaria will attend to share their knowledge and  projects on access and quality of education.

TSA is part of a consortium of organizations that organizes the event.

Read more about the “The Future of Education” forum here. 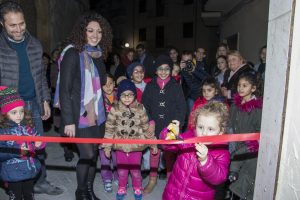 TOY for Inclusion is delighted to announce that new Play Hubs for children, families and adults have opened this month in Belgium, Croatia, Italy, Latvia, Slovenia and Slovakia. Our Play Hubs are safe education and care spaces where relationships between Roma and non-Roma young children and their families are built.

In Ghent toy libraries have been existing for 20 years. Our local partner the Centre for Innovation in the Early Years (VBJK) has worked to integrate the existing work on inclusion.

The TOY for Inclusion Play Hub has decided to meet Roma people where they gather: mostly in Neighborhood Centers and spaces managed by the civil society. Our activities started in two of Ghent’s neighborhoods, Ledeberg and Brugsepoort, where there is a big concentration of Roma-Slovak families who are not always reached by the local education services.

There, we are organizing now music lessons, free time activities for children and parenting support sessions. We usually bring toys from the nearby toy libraries in order to let children play and to sensitize families towards the toy libraries themselves.

Activities are usually planned every Wednesday, Saturday and Sunday. After spending some time in building up connections and trust, now families are increasingly attending.

TOY for Inclusion is thankful to the REYN National Coordinator in Belgium Centre for Innovation in the Early Years (VBJK) for the creation of the Play Hub activities. For more information you can contact Nima Sharmahd.

The Play Hub was officially opened by the mayor Kristina Baniček and by Klara Perković, mayor of the children’s city council. The opening ceremony was highly attended by the local community: children, parents, grandparents and volunteers.

The Play Hub opens, next to the local Toy Library, on Tuesdays and Thursdays from 5 PM to 7 PM.

The creation of the Play Hub was made possible thanks to the REYN National Coordinator in Croatia Korak Po Korak. For more information you can contact Sanja Brajković.

Two Play Hubs have opened their doors on January 20, 2018 in Italy. One is located in Tor Bella Monaca (a suburb of Rome), the other one is in Mazara del Vallo – in the province of Trapani, Sicily.

About 160 people attended the launch including experts, volunteers and representatives of the municipalities. The two opening ceremonies also saw the joyful and enthusiastic participation of many families with Romani and Italian background.

Adults and children learned about the activities that will be offered by the Play Hubs in the near future. Also, dozens of children tested the new toys available in the libraries.

In Mazara del Vallo, the Play Hub called Casa di Toy, is open every Monday and Wednesday from 4 PM to 7 PM and every first Saturday of the month from 10 AM to 1 PM.

The opening of this toy library was made possible thanks to Associazione 21 Luglio, REYN National Coordinator in Italy. For more information you can contact Francesca Petrucci.

The TOY for Inclusion Play Hub “Ringla” was officially opened in Jelgava on January 30, 2018. Children and their parents as well as representatives of local municipality and Ministry of Culture participated to the opening event. All guests were introduced to the library by Ringla: a Roma girl from a children’s book – a well-known character in Latvia. Ringla also invited all participants to create beautiful paintings and to leave colorful hand prints as a sign they had attended the opening.

Ringla will be waiting for children and their family members twice a week and will involve them in different activities. The first activity will be “Ringla’s drawing workshop”, where she and her friends will draw a calendar together, which later will be filled in with exciting activities and events.

We are thankful to the REYN National Coordinator in Latvia Center for Education Initiatives (CEI). For more information you can contact Kristīne Liepiņa

In Slovenia, the new Play Hub is located in a public library in Murska Sobota, a town with a large Roma community. The library has a department for children and is highly attended by the families living in the surroundings.

The opening ceremony on January 13, 2018, was attended by about 100 people who included families, experts and local volunteers. Two groups of children, one from a kindergarten and one from a primary school ‘spiced up’ the opening with a small show. Families and children were then shown the new Play Hub and were informed about its services; they were also invited to test and borrow the new toys available.

The launch was well covered by the local media in newspapers and by a Romani show on television.

The Play Hub is open every Saturday from 10 to 12 AM. In addition, TOY for Inclusion will organize workshops for families twice a month in collaboration with local associations.

The creation of the Play Hub was made possible thanks to the REYN National Coordinator in Slovenia Korak Za Korakom. For more information you can contact Mateja Mlinar.

Over 130 adults and children have visited the Play Hub in Spišský Hrhov on a regular basis, since the opening on December 8, 2017.

This new toy library is equipped with brand new furniture, lots of books, modern toys and games. The activities that are organized have become popular among people both from the Roma and from non-Roma community in the village.

Volunteers and teachers offer children more than just a place to play: children come together to draw, play sports, read and to attend different type of workshops.

While care services are offered to children, their parents can benefit from parental support at the TOY for Inclusion Play Hub as well.

On January 26, 2018, a school psychologist met parents of pre-school children to promote the benefits of attending day care at school. In particular, the psychologist shared data on how spending more time at day care in school can improve education results.

The opening of this toy library was made possible thanks to Skola Dokoran, REYN National Coordinator in Slovakia. For more information you can contact Miroslav Sklenka. Read more about this Play Hub here.

Nagydobos is a village of 2200 inhabitants; an estimated 15% of them are Roma. Alarmingly though, the local kindergarten has 180 children of which 89% Roma. This creates risks of segregation.

For this reason the Play Hub was located on the main street of the village, to attract both Roma and non-Roma. The mediators are highly trusted and attract members of both communities. The Play Hub is visited by teachers, parents and children.

“It is wonderful here, there is a calm atmosphere. This is a play land and it’s my dream”, said a 4 years old Roma child.

Find out more about how TOY for Inclusion’s Play Hubs can contribute to Roma integration on  toy4inclusion.eu.

The National Association of Teachers of Travellers is a professional association in the UK that has an annual conference conference, bi-annal resource fairs, professional development courses and support for teachers working with Gypsy, Roma and Traveller pupils and students.

The conference this year, to be held on 15 March in Birmingham, UK is specifically about Roma and also features a workshop about early childhood development, in light of a call from the executive board in 2011 to establish an ECD interest group that met with little response.

In my continuing effort to connect up people, networks, projects and the worlds of ECD and Roma, Gypsy, Traveller education and rights, please pass this information to colleagues who might be interested.

More information on the event is available here.

30 families from the Roma community in Kosovo received #tablets from KEC - the hosting organization of #REYN_Kosovo.

“Online #learning is now easier for our children because,” shares a parent of a child who has got a tablet.