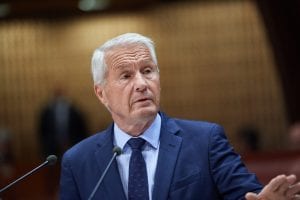 Last week, the Secretary General of the Council of Europe Thorbjørn Jagland visited our Play Hub in Spišský Hrhov (Slovakia) and complimented the staff about the initiative. He hasn’t been the first one though. Since its opening, the Play Hub has been pointed at as an example of integration by national and local authorities

“Your project is the best example of how to include Roma children at an early age”, said Thorbjørn Jagland, Secretary General of the Council of Europe to the coordinator of the TOY for Inclusion Play Hub, Peter Strážik.

The local staff and the volunteers report that Mr Jagland was very pleased with the initiative and played a few minutes with the children.

The Play Hub is situated in the kindergarten and school of the village. Since the opening the initiative has been applauded by the Slovakian authorities too.

“The Play Hub in Spišský Hrhov means a world of opportunities to the kids of Roma communities. Fifteen years ago such scenario had been just a wish”, said Vladimíra Ledecká, of the Office of the President of the Slovak Republic.

“We should have had this long ago; it so simple, rare and unique! A real place to bring all kids together. I know that this Play Hub is a good example to other municipalities that struggle to fight prejudices against Roma”, echoed Dr. Vladimír Ledecký, Mayor of Spišský Hrhov.

The TOY for Inclusion Play Hub has been created mostly thanks to the cooperation between the local community, the municipality and some civil society organizations both national and international. With a relatively small budget provided by the European Union and with the big support given by the local school, the (grand)parents and the many volunteers.

Do you want to create your own Play Hub? Write to us at info@reyn.eu.