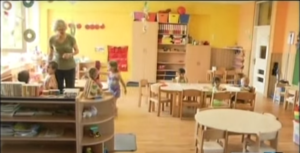 The following video presents the Roma settlement Pušča (north-east of Slovenia) and its kindergarten “Romano”, which aired on CNN in 2011. Pušča is the largest Slovenian Roma settlement and the first independent local community in Slovenia and Europe (click on the link below).

A kindergarten is located in this settlement that marked its 50th anniversary. The primary intention was to include only the Roma children, but the kindergarten is becoming more multicultural. There are also non-Roma children that are attending this kindergarten, as a result of coexistence between Roma and majority in the municipality and activities of Roma in the local community. There are currently 22 Roma children and 8 non-Roma children enrolled in the kindergarten. The kindergarten uses the pedagogy of Maria Montessori and is taking part of the project “The increase in social and cultural capital in areas with a Roma population”, which is funded by European Social Fund and Ministry of Education, Science, Culture and Sports. Its objectives are to increase the level of education of the Roma community members and to raise awareness about the significance of education as the fundamental factor in the progress of the community.