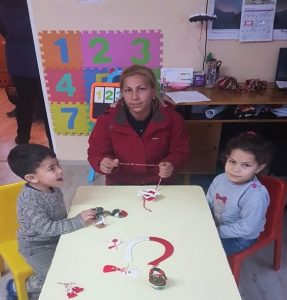 Restoring one of the pre-school groups in 2019, so that all children could have the chance to enroll, was the decision of the kindergarten principal Svetlana Zlateva. She was convinced she could find the funding for this task. She also wanted to involve parents, increase their motivation and improve attendance of children.

After several month of negotiations with the municipality of Yambol, as well as renovations, the building was renovated and ready to be opened. That is where Svetlana Zlateva met Radka and her children.

Meeting the kindergarten principal was  very important for Radka. The mother had many problems, and dealing with the documentation in the municipality was one of them. Soon after the principal found out that Radka had financial difficulties and could not afford to buy new clothes for her children or pay for their medical examinations, required for attending kindergarten, Svetlana Zlateva decided to help Radka, lending her some money and arranging clothes for her children. Svetlana lent Radka money and arranged clothes for her son and daughter. Moreover, she offered the young mother a position as health officer at the kindergarten.

While working together, Svetlana Zlateva and Radka got close and the principal learnt more about Radka’s past. Radka was born in the village of Ravnets in the Burgas municipality. She dreamt about finishing her education and finding a job. However, at the age of 14, after finishing the 7th grade, Radka was faced with the unfortunate path of many Roma girls – she was stolen and married against her will.

With the support of the kindergarten staff, Radka has a job now. She also has motivation to continue her education after so many years. Now she is a student of the 8th grade.

This story was shared by Svetlana Zlateva, who, together with kindergarten “Spring” and its staff, is a long-term member of the REYN Bulgaria Network. Over the years, the kindergarten, led by Svetlana Zlateva, has taken part in many projects developed and initiated by REYN Bulgaria, and thus managed to help many Roma in Bulgaria and the Yambol region. Mrs. Zlateva continues to work towards helping as many people and children as possible, as she believes that everyone should be given the opportunity to learn and grow.