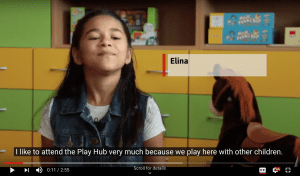 Elina is cheerful and friendly.  She is a great girl and everyone accepts her, her friends told me. Elina loves to come to the Toy for Inclusion Play Hub in Spišský Hrhov (Slovakia). This has helped her ability to communicate with others. She is also a good student and would like to become an educator.

Elina, 12, is the eldest of four children, has two younger sisters and a small brother. Elina is a Roma. She lives in Spišský Hrhov, in a district where more than 98% of the local Roma are based.

Elina is cheerful and friendly.  She is a great girl and everyone accepts her, her friends told me. That is how it should be always and everywhere.

Not long ago Elina has become the star of the Play Hub.  Thanks to her appearance in the Toy for Inclusion promotional video, her smile and her communication talent. In the video, she described why she likes to come to the Play Hub and what activities she is involved in. We all enjoyed watching the video on social networks.

Elina, with her siblings and parents live in a new brick house with running water, heating, bathroom and internet connection. Every member of the family has a smartphone and they actively use internet.

They have their accounts on social media and they use them to communicate with me regularly. On Sundays, Elina‘s family goes for a walk in the local park, which is a rarity. Roma families usually prefer to stay in their community, at home or on the street. Elina‘s family also attends different events in the village, such as concerts, theater performances and art exhibitions. They do their best to integrate in Spišský Hrhov. We like them!

I met the family when Elina enrolled in school after finishing kindergarten and came to visit the school with her parents. Since then, the parents have been regularly communicating with the school, showing interest in the performance and attendance not only of Elina but also of her two younger sisters. They regularly visit parents’ meetings, while honestly, most of the Roma parents in the village do not.

It seems to me that, at least is some cases, they fear criticism about their children having a lower attendance and grades than other children. Comprehensibly, who would want to listen to their children being criticized in front of other parents? Roma families often prefer personal meetings. with the teacher.

Elina’s parents are an exception. We became closer since they started visiting the Play Hub. Nowadays, we meet weekly for a wide range of activities.

I am very glad that the school has a place like the Toy for Inclusion Play Hub. This enables us to have informal talks with the parents during extra-curricular activities. We have time to talk about their family situation, drink a coffee together, things that I do not have the occasion to do during the school hours.

Elina’s parents got used to their regular visits and enjoy them. They engage in activities and games with the children, her mum even volunteers at the Play Hub, often helping to prepare activities with Elina. They also borrow games they do not have at home, always returning them in perfect shape, and this is a success, it helps build the children’s trust and responsibility. Another positive thing is that they play together at home, not many parents nowadays have time and space to play with their children.

We also noticed that visiting the Toy for Inclusion Play Hub has helped Elina expand her ability to communicate; according to her literature teacher, she is more eloquent, active and likes to describe the texts she reads. This makes us all very happy! Her effort and hard work have helped her to be accepted by the majority, I know that all the children in her class consider her a good friend. She says that she would like to work as a kindergarten teacher in the future, and I am sure that if she continues with her pace and trend, she will succeed.