Home / News / One in One Hundred: Educational success starts in early childhood 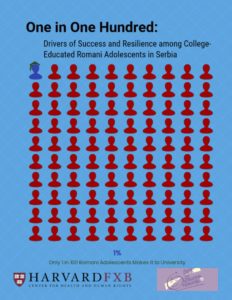 A new study shows that access to education services at an early age, quality teachers and educated relatives make the difference in the path to educational success.

The study “One in One Hundred: Drivers of Success and Resilience among College-Educated Romani Adolescents in Serbia”, highlights the fact that only one in 100 Serbian Romani students advance to university. Why is that?

It’s what the researchers of the François-Xavier Bagnoud Center for Health and Human Rights at Harvard University (Harvard FXB) and ISSA member CIP-Center for Interactive Pedagogy in Belgrade asked themselves. Researchers went beyond the scrutiny of educational deficits and obstacles to focus on what actually works.

They studied the responses from surveys, interviews, and a “Writing Romani Lives” workshop conducted with 89 Romani adolescents who made it to university and 100 who did not. The findings showed that strong teacher and peer support systems, access to early childhood development services, and a high level of education among immediate family members corresponded to educational success.

According to the 2014 Serbian Statistical Office (SSO)/UNICEF survey report, only 6 percent of Romani children between the ages of three and five attended early childhood education programs, compared with 50 percent of the Serbian national average. The report’s numbers also show a “significantly larger number” of university versus comparison respondents attended kindergarten, 63 to 44 percent, respectively.

These figures are not just a Serbian prerogative, though. The situation is comparable to many other European countries where exclusion and school segregation hamper the children’s development.

The right peers and teachers

Interestingly, the study also pointed to a second critical driver of the success for Romani students: the support from a teacher or a peer who believed in their abilities and desire to learn and who stood up for them. “Those who made it to college said they had benefited from a peer or a teacher who supported them when they felt discriminated against,” said Magda Matache, head of the Roma Program at Harvard FXB.

In addition, said Matache, more Romani teachers, cultural sensitivity training for students and teachers, and a curriculum that better reflects the history of the Roma in Europe will all make a difference.

About the International Step by Step Association (ISSA)
ISSA is the driving force behind REYN. ISSA is a network committed to the development of every child, across all domains – sharing knowledge and tools to improve the quality of Early Childhood Development and its workforce. In (pre)schools, creches, kindergartens and daycare centers across Europe, and in other services for young children and their families. As a network, we gather and generate prominent studies and insights on child development and learning and convey them to our peers, member organizations and policy makers, so they can put them to good use.

We urge European leaders and country leaders to provide every child with the proper conditions to ensure protection and support in all aspects of life.