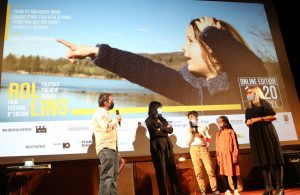 The film “Daniel” about Roma children, made with the support of Kosova Education Center (KEC) – the hosting organization of REYN Kosovo – opened Rolling Film Festival in April 2021. This festival is Kosovo’s most appreciated bi-annual event for introducing other Kosovo communities to the Roma community, for supporting Roma artistic expression, and for providing a festive, dynamic, and transformative venue for combating stereotypes and promoting positive inter-ethnic relations.

The film “Daniel” is about the education, schooling, and everyday life of Roma children in Kosovo. The main character Daniel is a child of 11 years old. After the wedding day of his 14-year-old sister, he decides to run away from home with his 8-year-old younger sister Berfina. In this way, he wishes to save her from the same fate as her sister’s. The target of children is the capital city, and their journey is very difficult.

“The film contains many issues that Roma community, unfortunately, has to face in Kosovo: early marriages, school dropouts, poverty, and survival,” says Hana Zylfiu Haziri, Kosova Education Center Program Manager. “All these topics that are addressed in the film show the difficulties and complicated situations that the Roma community is facing on a daily basis. On the other hand, these episodes in the film make the audience reflect and think about how much support they need morally and financially from others.”

Since KEC and the creators of “Daniel” wanted the film to be released in the best possible way so that a wider audience could be able to watch it, the Rolling Film Festival was an excellent opportunity to do it.

The festival was held in the Kosovo cinema center “KINO ARMATA” with a limited number of participants due to the COVID-19 pandemic. The rest of the audience had the opportunity to watch the movie through the online platform – online.rollingfilm.org.

In the future, Kosova Education Center will use this film to encourage the debates on educating vulnerable communities, in conferences, webinars, advocacy campaigns, etc.