Home / News / TOY for Inclusion Play Hub in Italy: a gateway to pre-school for Nerima 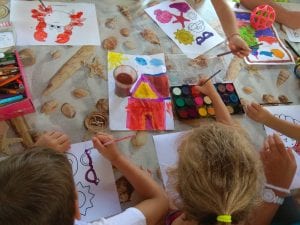 An estimated 50% of Romani children don’t go to school in Europe.  Often they are excluded or feel unwelcome by their non-Roma peers and teachers. In other cases they simply live fare away from services.  TOY for Inclusion is becoming the gateway to school and kindergarten for many Romani children. This is the story of a 5 year old Romani girl called Nerima; she was looking for a safe play space and found a pre-school.

If you visit the TOY for Inclusion Play Hub in Mazara del Vallo (Italy), you will perceive a certain familiar atmosphere. People feel comfortable and families participate in activities together. This is what Nerima was looking for when she joined.

At the beginning her family wouldn’t let her alone with other children. Nerima has a disability and her family feared that the other children might not welcome her. Her family decided that it was important for her to attend but always during less busy times and accompanied by an adult.

Week after week, month after month, Nerima became familiar with the Play Hub. She enjoyed using the toys, she became more confident and gave other children the possibility to play with her. Eventually her family realized that the Play Hub was not something to be afraid of, but rather a place that supported their daughter’s development. It was a safe place.

Thanks to this experience, Nerima’s family decided to register her to pre-school, giving her the chance to integrate and to develop to the fullest.

TOY for Inclusion’s mission is to foster integration of Romani children by giving them access to community-based services. We are thrilled to meet families like Nerima’s, who recognize the importance of learning and playing.

Mazara del Vallo hosts one of the two Play Hubs in Italy, the other one is located in Rome. A few months away from the opening, the TOY for Inclusion Play Hubs are becoming the gateway to school and kindergarten, and we are proud of that!

Whether we define Roma in the as a social group or national minority, it is obvious that this group is subject to a school policy to which they are required to adjust without any possibility of participating in its creation. http://www.erstestiftung.org/en/the-invisible-curriculum