Home / News / Getting Out to Dream: simple dreams of home 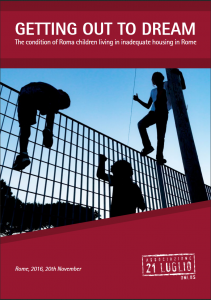 In 2007, after my university studies and a short experience of working in a segregated Roma community in Slovakia, I started my internship at the Budapest-based European Roma Rights Centre. Among my very first tasks was being sent on a mission to Rome to map the situation of Roma, seeking better living conditions, who were arriving there from other parts of Europe. I saw extreme living conditions, people literally living just from day to day, harassed by the police and still hoping for better lives for their children. I saw big men crying and concluding that even if it was difficult, it was worth it.

Many years have passed since those times, but the recently published report by Associazione 21 Luglio reveals very little, to no, improvements at all. In many aspects, the situation of Romani families, in formal (designed and managed by authorities) or informal (established spontaneously) camps may have worsened significantly. According to findings of Associazione 21 Luglio a Roma child who is born in this environment has almost zero chance of going to university and their chance of going finishing high school remains below 1%.

Research estimates that in Rome alone there are approximately 4,100 Romani children, of different nationalities, living in horrendous conditions: as many as 1,350 of them under six years old. These children are growing up in alarming, unhygienic conditions, among piles of waste which represent a constant threat to their immediate well being and their healthy development.

In addition to abysmal conditions, Associazione 21 Luglio has also pointed out how a lack of security of tenure for Romani families living in camps increases their vulnerability. In 2013 the number of recorded force evictions in Rome of Roma families was 54. In 2014 the figure dropped to 34 evictions but rose aggressively in 2015 when a total of 80 forced evictions from informal camps – which affected 1, 470 people, of which 810 were children – was recorded.

Difficult living conditions may serve as determinants for low school attendance. Mapping of school year 2014-2015, shows that among the Romani children enrolled in school, one out of five never showed up in class.  Out of approximately 1,800 children enrolled, only 198 attended classes regularly. With a new law in place, which implies that children with low attendance may not be admitted to the grading meeting, 90% of Romani school children are at risk of failing the year and having to repeat it. In this situation, where children do not have access to primary – mandatory – education, early childhood services are virtually non-existent.

The report by Associazione 21 Luglio  “Getting Out to Dream” and is a compilation of dreams. Simple dreams of home – of not seeing your home destroyed-  and dreams of going to school, makes brutal reading as the children fantasize about the fulfillment of their fundamental rights. Only by fulfilling their fundamental rights can children dream of higher and better things and only then can they imagine a fulfilling and fulfilled future.

Associazione 21 Luglio is the host of Romani Early Years Network Italy. Check their website, become a member and see how you can help.

You may want to start by signing a petition against forced evictions.

The @EU_Commission report assessing Member States' progress on national strategies for Roma equality highlights that #NRSFs do not adequately address the removal of obstacles to the participation of Roma children in kindergartens.
#Romachildren #REYN