Home / Empowered Roma / “We can be the spark of change” 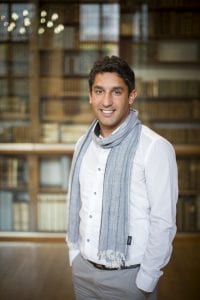 “Political leaders should strive to care for every child but from what I have seen, that’s not always the case,” says Global Leader Driton Berisha. While running an early childhood project, Driton helped raise the enrollment rate of Romani children in pre-school to above 95%.

“I never liked unjust treatment. I am helping Romani children not because I am Roma but because where I live they face discrimination, prejudice and unequal access to public institutions. Whenever I can, I speak out about this,” says Driton Berisha.

Driton is an early childhood education activist from Kosovo. He has been working to help child development and the workforce for the past 12 years.

“Roma are the largest minority in Europe. They need more support in order for them to be treated equally and this starts with education. I promote this because it is the right thing,” he continues.

After working with the Kosova Education Centre (KEC) for four years, he recently moved to the Roma Education Fund (REF) as Country Facilitator. His job involves strengthening the Roma Ashkali and Egyptian communities’ education at different levels, including early childhood development.
“Children are still exposed to inequality. Only four Romani children were going to public preschool in my region in 2013. Dozens of other Romani children did not have this chance.”

With KEC and REF, Driton launched a project to have more children enrolled and obtained great results, over 90 newly subscribed Romani children each year in the period 2014-2018.

“That means that over 95% of 5 to 6 years old attended the preprimary schools in the villages of Plemetina, Preoce and Gracanica; while 50% of 4 to 5 years old subscribed to public kindergartens for the first time”.

KEC coordinates the REYN National Network and it is probably the largest organization of its kind in Kosovo. It manages its own primary school and high school but also works on research and policy making in the fields of education and human rights.

“I always wanted to work with an organization that exposes unjust situations” – Driton says. “I believe that a lot of political leaders need to stop talking about how great patriots they are and instead, truly worry about human beings. It may sound basic but unfortunately it’s not happening”.

Driton shares a story that explains his motivation. “A while ago I was running a learning center for preschool and primary school pupils; many children came there after school to do their home works. Once, there was a child who wanted to dropout from school. It took me about half an hour to convince him and his family not to take the wrong choice. These days I saw the same child. He is a grown up now and he is the one helping other children to do their home works. These things make you feel good about working for others.”

A Global Leader for Young Children

In 2018, Driton successfully concluded his project as a Global Leader for Young Children with the World Forum Foundation. The program supports Roma activists who want to help early childhood development move forward in their community.

“In my community many Romani families can hardly provide a proper space for children to study, so I have decided to help them make one.”

The project is called ‘Dream Corners’ and it creates spaces in the houses of young Romani children to study, draw or play. Volunteers helped build tables and chairs, collected different school supplies and arranged them to create Dream Corners for 15 primary school children.

“We also involved the local youth. They didn’t only help set up the study corners but they periodically visited the families to provide support to the children.”

The short documentary above, was produced with the help of volunteers and shows the project from creation to monitoring. This is being used to reach out to more families throughout the world and promote the idea.

“This may be a small step but I hope we can be the spark of a bigger change. Children should have their own place for studying and playing. I think many families will want that.”

How can we promote Access to Early Childhood Education and Care for Roma children?
#ECEC #Roma #earlyyears #education
https://www.schooleducationgateway.eu/en/pub/latest/news/access-to-ecec-roma-children.htm