Home / Empowered Roma / Nedzad “Pio” Husovic: “I Become a Child Myself when I Play with Children” 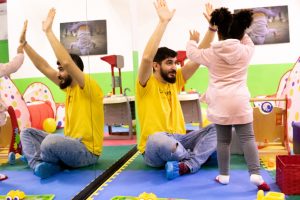 Nedzad “Pio” Husovic is a Roma rights activist from Italy. He has been working with Associazione 21 luglio for almost six years. Starting as an intern and learning more about human rights practices and advocacy, Pio is now Early Childhood Development practitioner and a member of REYN Italy and Play Hub Assistant in one of the TOY for Inclusion ECEC Play Hubs in Rome. Today we are talking with him about his life path as a Roma child and how his work is helping Roma children to begin to dream again and making their lives better.

– Pio, how old were you when you did your internship with Associazione 21 luglio? What is your role in the organization now?

– I was 23 years old. During the internship I contributed to a project called Observatory 21 luglio, where I was looking for the articles inciting to hate speech towards Roma and Sinti in several newspapers. The articles were sorted and catalogued, in some cases injunctions letters were sent to the people responsible for the episodes together with complaints to the order of journalists and other competent authorities. The search was done by keywords such as “Roma, Sinti, Gypsies”. The Observatory is still working today to contrast the hate speech against Roma.

After a few years, Associazione 21 luglio began to work in the district of Tor Bella Monaca, taking in concession the structure “Polo Ex Fienile”, where various activities and projects are carried out. These previously included only Roma children, and now they have a multi-ethnic audience. Through different educational workshops we teach children to be together, to accept the diversity, the richness of diversity and above all to express themselves. They are also learning to read and to write better, to move, and to coordinate.

Together with another colleague, I also manage an ECEC Play Hub inside a school in the neighbourhood. We lend books and toys to children and bring generations – children, parents and grandparents – together. Usually, when parents come to pick their children up from school, they are busy and always in a hurry. They do not have a moment to get together with other parents and exchange thoughts. We have this space where we meet with parents and let them discover the importance of playing together with their children. We have repainted the library and stocked it with books and toys made of wood and other sustainable materials. We avoid using plastic because we want children and parents to discover tactility. We want them to know how a wooden toy, a sponge toy or a fabric book would feel. All these things make them discover another reality of playing.

Then we get together with children to read fairy tales, stories, so the environment becomes more familiar, more welcoming than the classic school with its desks and the teacher who directs. We are all on the same level with us acting as facilitators. Usually, places like this become “parking lots” where parents leave their kids and go. On the other hand, the Play Hubs are places where you meet and listen to each other, where parents listen to children.

– Did you become an educator through all these projects, or did you also go to school, do a course or a training?

– I never started high school. I have finished the eighth grade and I also have several certificates of participation in courses and training for educators, etc. All of this happened because I had a problem with my papers when I was a kid. I was born and raised in Italy by a Bosnian father and a stateless mother. So, I am a de facto stateless person, and I am not recognized. I was given an Italian residence permit for humanitarian reasons. In fact, this year they gave it to me for “special reasons”. I do not understand what this wording means, but since there is a new security law, they have eliminated the residence permit for humanitarian reasons.

– Were you then kicked out of school because you did not have documents needed?

– …that instead of helping you, gets on your way…

– Exactly. Then, with the help of Associazione 21 luglio, I started to train to become an educator. It was the Association that gave me the knowledge in pedagogy, where I developed skills in listening and interacting with children in different ways. Now, finally, I have made some steps like getting out the camp…

– I used to live at the camp in Via di Salone – in the extreme outskirts of eastern Rome until a year ago. In that camp now there are about 300 adults and children. In 2010-2011, when I arrived there were almost 1,800 people. About a year ago I managed to find a room in Rome in an apartment where I live with a roommate. Leaving the camp was a big step for me which came with many difficulties.

– How was your life in the camp when you were growing up?

– I grew up in Rome in an informal settlement – the former Casilino 900 – one of the biggest camps in Europe that was situated in the Centocelle district. I lived like a normal child, not ghettoized. I was in the city, I had Italian friends, I was not a segregated Roma child. When I was at Casilino 900, we had a wooden house made by my grandfather and father, like the ones you can find today in campsites. In that way, we lived quite well, although there were problems such as discrimination in the camp and outside. But there were people who accepted you for who you were and you did not feel that much difference about being Roma. Maybe we did not have all the comforts inside the house, like a bathroom. We had the chemical one. But you get used to it. We were living well because we were in the neighbourhood, not marginalized. Being inside the city is a good thing.

Then in 2010, the famous city council led by Alemanno, justified by the Roma emergency decree issued in Italy, decided to evacuate the camp. We were “deported” to Via di Salone – institutional camp with a metal fence, cameras everywhere, concrete walls and container houses. It is a ghetto on the outskirts of the city where the only way you could move is the regional train, which hardly ever passes. So, to get out and get close to the city, you must walk almost two miles. If I can use a metaphor, it is like getting a bit from the frying pan to the grill.

– Can we say that people in the camp do not want to be there and want to go out?

– Yes, there are people who do not have tools and cannot get out. Others who do not face reality, live in a glass bell that is the model of the camp. Some people think that the Roma camp is culture. Today after 4-5 generations living inside the camp, if you ask a Roma boy who lives inside the camp what the Roma culture is, he will tell you that it is living inside the camp because he has been indoctrinated by the system. Today, if I talk to a Roma boy and I say: “If you work hard, go ahead, think and act with your head, you can do it,” that camp boy will most likely reply: “No, but this is normal life here.”

– Why did you choose to do the work you are doing now? Why did you join an organization that deals with human rights and education?

– I got into it by accident. I began as a Roma rights activist. At the age of 19, I found myself working in a non-profit organization that was involved in the management of Roma camps, accompanying Roma children to school in the famous yellow minibuses. These buses take children to school an hour later and pick them up an hour earlier than the other children who do not live in camps. In that way, children are not integrated at school that much. Even today this happens.

I started asking myself what I really wanted and how much I liked that job. In fact, I did not feel challenged by what I was doing and I asked my coordinator if I could change something. There was a kindergarten in the camp, and that is where I had my first professional experience as an educator. For six months I have managed this kindergarten together with a colleague. There I started to experiment with children: stimulating them, letting them to draw what they want, making origami with them, listening to music together to make them express their potential… Gradually, the number of kids increased by 70-80%, and we had almost 30 children.

– What do you like about the job you are doing now, and why do you do it?

– I like to play and getting into the game, I become an integral part of the children’s group. I am one of them too, even if I am a little bit older. In my house they say one thing: “Good blood attracts children.” It is a bit weird to say, but it makes lots of sense. I like my job very much because I like being among people and making them smile. That does not change with children and adults.

– How do you see your long-term future? Do you have any specific goals?

– I want to be a real educator. For that, I have to finish a high school and then I can enrol at the university. It is an ambitious project, and I know, that needs lots of determination. I was a Roma child myself who experienced discrimination during my childhood. I often see this discrimination against children, and not only Roma children but in general all children. Living in the neighbourhood of Tor Bella Monaca, working with children who live there, I see that they are treated differently. When I ask them how was their school, they often answer that it went wrong. They say that their teachers sent them away and let them do whatever they wanted. But the thing is teachers do not really let them do what they want. The idea is to get them out of the way so they can teach a lesson in peace. I can change this by talking to the children, trying to understand what they need, giving them a place where they can express themselves, where they slowly begin to forge their own identity. Giving that little drop of awareness that slowly grows, maybe children starts to understand that they can behave differently in class, raise the hand, participate, and respond.