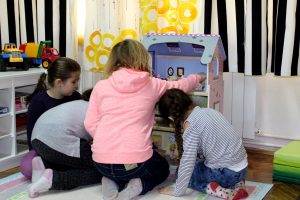 After a powerful 6.4 magnitude earthquake struck central Croatia on December 29th, members of the TOY from Inclusion team in Sisak are still feeling the impact. The earthquake happened about 15 km from Sisak, a town that hosts one of the TOY Play Hubs.

During the earthquake, seven people died, one of which was a 12-year-old girl. Petrinja, the epicenter, and Sisak are devastated. Colleagues from the TOY for Inclusion Local Action Team (LAT) were not injured; however, their homes are damaged.

The biggest challenge now, which keeps residents from returning to ‘normal’ life, is constant fear since the ground has continued shaking for days.

However, good news comes from the epicenter of the earthquake as well; the first baby born in Croatia this year is from this city. And, if you can imagine, not a single toy fell from the shelves at the Play Hub in Sisak!

Partners in Croatia aim to revitalize ECEC Play Hub activities. Open Acadamy Step by Step donated toys and other materials for children. These toys will be donated to children in Sisak and Petrinja.

Have you ever wondered about the differences between the EU citizen and EU Roma citizen? Have you thought what European child and European child with Roma background have in common? Celebrating #RomaDay, find out this data in our fact sheet. #DreamToGrow #50thRomaDay