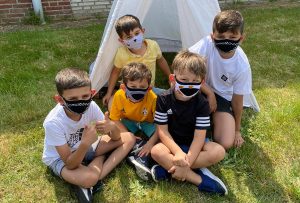 Monday, May 18th, the TOY Play Hub in the Netherlands opened after several months of lockdown in the country.

The first activities were organized outside with safety measures in place. Ten children and four parents joined. Two of the families were new to the Play Hub. Children listened intently to a story about “Corona on a Journey”, which was told in Romanes.

The children also participated in an experiment to show the importance of handwashing. The experiment was done with water, soap, and pepper. The pepper, which the children coined “little corona” represented the virus.  The demonstration was a hit with the children, and they asked to do it several times before continuing with other activities.

The outside gathering also included making masks out of socks, hide-and-seek, tag, soccer, skippy ball, and hula-hoop. Fruits and sandwiches were provided.

On May 25th, a treasure hunt was organized. It began at the Play Hub and took place throughout the neighborhood, ending at the local playground where children played together. They were also able to make their own masks at a table set up by the Play Hub coordinators. It was an extra special day as it also marked the first time that non-Roma parents and children joined the activities.

Other children and families in the neighborhood took interest in the activities, and coordinators hope more children will join future activities at the Play Hub.