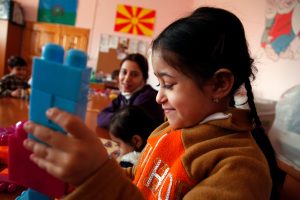 The Roma Early Childhood Inclusion (RECI) initiative was unique… It was one of a kind at the time in 2009. RECI was the brainchild of the European offices of The Open Society Foundations, UNICEF and the Roma Education Fund. As collaborating agencies, our effort was to bring together our voices and expertise in early childhood development, child rights, social inclusion and education with the aim of reaching two key objectives. The first was to study comprehensively and in-depth the situation of young Roma children in Europe, and the second was to engage in evidence-based advocacy at both the national and regional level.

The late John Bennett was nothing short of the mainstay of the RECI effort. A prominent European thinker, he was best known for his leadership of the OECD’s Thematic Reviews of early childhood education and care (ECEC) policy and provision in twenty countries. John the writer, researcher, analyst and advocate accompanied us through the early stages of planning and designing the RECI studies and events. His keen commitment, his wise counsel, his profound understanding of the situation of Roma children and his meticulous editing skills helped to package the RECI studies into world class research reports.

Roma children are among the poorest and most marginalized in Europe. Their marginalization starts in early childhood and continues and intensifies into their adulthood.

Roma children are among the poorest and most marginalized in Europe. Their marginalization starts in early childhood and continues and intensifies into their adulthood. While a great deal has been written about Roma adults, much less attention has been paid to children, particularly young children – infants, toddlers and pre-schoolers. In the RECI reports, our effort was to examine the situation of this group of children through a holistic, child rights lens – focusing on their survival, health, development, education, protection and inclusion. Simultaneously, we assessed and analysed the opportunities and barriers to the fulfilment of their rights as well as the gaps and limitations of existing policies and services at country level. The initial desk research and stakeholder interviews were conducted by local experts with the support of OSF, REF and UNICEF colleagues in country.

A special feature of the RECI reports was the sequencing of the research and advocacy activities. The preliminary findings of the substantive chapters covering young Roma children’s situation and relevant policies and plans were presented in the first part of a National Consultation (NC) which brought together domestic decision makers and stakeholders, including colleagues from the local offices of the EU, World Bank and civil society organizations. In the second part of the NC, recommendations to address and improve the situation of young Roma children were co-constructed with the participants. The purpose was to solicit their informed contributions in the process of developing recommendations and their commitment in implementing the recommendations. The last chapter of the RECI reports was written after the NC and fully reflected the concerns and commitments of the participating stakeholders.

Even though we pooled our resources into the preparation of the reports, budgetary limitations were always a constraint. In 2010, the RECI initiative got a boost when UNICEF bid for and received time-bound funding from the EC’s DG Employment, Social Affairs and Equal Opportunities. One year of a flood of RECI activities followed. These took place under the banner of the Roma Good Start Initiative (RGSI), and with the cooperation of the EU, OSF, REF, UNICEF and ISSA. Country reports were initiated, researched, edited, finalized, designed and printed, and translated versions were made available; consultation meetings, workshops, public lectures and seminars were held; and policy briefs, photo essays, and print and audio-video communication material were developed and disseminated widely.  A detailed evaluation of RGSI concluded that “RGSI was timely since it contributed greatly to national strategies and plans and even sensitized Roma NGOs regarding relevance of early learning… The voice of Roma mothers and grassroots voices amplified the relevance of RGSI.”

The compelling nature of RECI’s work ensured that it has continued to the present day.  As I write in November 2020, I understand that the RECI Bulgaria Report is poised for launching in a few days. A great deal needs to be done to ensure that all Roma children get the best start in life. That said, it is a source of utmost satisfaction to all the agencies that created and nurtured RECI, that early childhood development is now an important part of the Roma child rights agenda and that Roma children’s rights are firmly embedded in the early childhood discourse in Europe.

The program of the event and information about the speakers can be found here. Register to join the event here.

As a result of systemic racism and discrimination, Roma communities continue to suffer the highest rates of poverty and social exclusion in Europe. Deprived of their fundamental human rights, a majority live in communities where there is high unemployment, low quality housing, and limited access to basic utilities, health care, and social protection services. Infant mortality and childhood illnesses are higher in Roma communities, vaccination rates are lower, and only half as many Roma children participate in early education compared with majority populations. Too many Roma children and their families have been “left further behind” during the COVID-19 pandemic, increasing poverty and social exclusion.

Between 2009 and 2020, the Open Society Early Childhood Program, the Roma Education Fund, and UNICEF joined forces to produce eight national Roma Early Childhood Inclusion (RECI) reports. The principal objective was to make information and data on young Roma children’s exclusion available to decision makers and key stakeholders in Europe with a view to strengthening advocacy for equitable early childhood policies and programs.